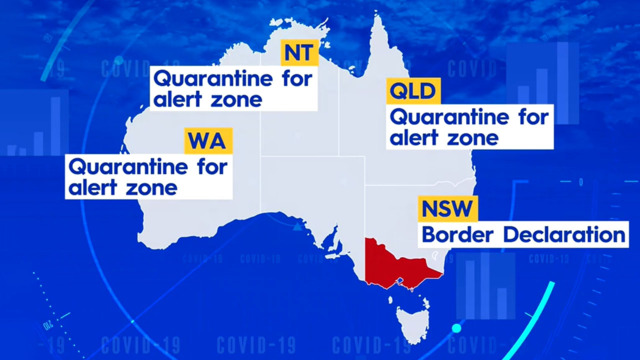 Restrictions have been put in place by states and territories around Australia to limit the spread of the Melbourne Covid-19 outbreak.

As of today (26/5/21), the total number connected to the Melbourne north cluster is 15 with 6 new cases being added this morning.

South Australia and Queensland have closed their borders to Melburnians from the City of Whittlesea. Other states and territories are requiring testing and self-solation.

Here is a state-by-state breakdown of how governments are reacting to the Melbourne outbreak.

New South Wales and the ACT

Everyone arriving in NSW – whether by air, rail, or road – who has been in the Greater Melbourne area, must fill out a travel declaration form confirming they have not visited a venue of concern as listed on the Victorian Government website, NSW Health says.

This has now been extended to the Bendigo area.

Anyone who has visited areas of concern will be required to self-isolate for 14 days.

In addition, anyone who has been in the Greater Melbourne and Bendigo areas in the past 14 days since May 12 has been advised to avoid residential aged care or healthcare facilities “unless seeking treatment or for compassionate reasons,” NSW Health said in a statement.

“Check it at lunchtime, check it tonight and check it tomorrow morning,” she said. Anyone who has visited Melbourne since May 10 and has been to one of the listed exposure sites has also been urged to contact NSW Health to ensure they are meeting the state’s isolation and testing requirements.

ACT Health said residents who are already in or entering the ACT and have been to one of the close contact exposure locations in Melbourne at the dates and times specified must:

Get tested for COVID-19, regardless of whether symptoms are present, as advised by an authorised person within ACT Health

Non-ACT residents who have been to an exposure site in Melbourne must not enter the ACT unless they obtain an exemption before arriving.

Queensland has declared the City of Whittlesea local government area a COVID-19 hotspot.

The following new measures are being put in place:

From 1 am on Wednesday, May 26, anyone arriving into Queensland who has been in the City of Whittlesea local government area since May 11 will go into hotel quarantine unless they have a valid exemption

From 1 am on Thursday, May 27, everyone arriving from Victoria will be required to complete a border pass

Dr. Young said Queensland would continue to monitor the situation. “Acting quickly matters,” she said. “These situations are always evolving, but we know the next few days are critical in suppressing the risk of the virus spreading. “Further restrictions may be required,” Dr. Young said.

The requirement to quarantine also applies to those who have been fully vaccinated.

Almost everyone who has been in the City of Whittlesea in the past four days is banned from entering South Australia, with significant restrictions for those from other parts of Melbourne.

Essential travellers and those the state deems to be “permitted arrivals” can enter, but they must self-isolate for two weeks and get tested three times, according to the state’s cross-border travel rules.

However, even essential travellers are banned from entering the state if they’ve been to one of Melbourne’s listed exposure sites. Those fleeing domestic violence can still enter but must quarantine as directed.

Lesser restrictions also apply for anyone who has been anywhere else in Greater Melbourne during the past fortnight.

They have to self-quarantine until they get a negative COVID-19 test result and get tested again five and 13 days after arrival.

The report into how the coronavirus leaked out of the Playford Hotel, seeding the Melbourne outbreak, is yet to be finalised.

From 6 pm on May 25, all arrivals in WA from Victoria will be required to take a COVID-19 test and self-quarantine until they receive a result.

New arrivals will not be allowed to use public transport until they have received their result.

Additionally, anyone who had visited exposure sites in Victoria at the relevant times should get tested immediately for COVID-19 and quarantine for 14 days from the date of exposure.

WA’s Acting Chief Health Officer Dr. Paul Armstrong said he would be notified if any close or casual contacts were found to be in Western Australia for follow-up by the public health team.

“We will continue to monitor the situation in Victoria very closely and issue updated health advice as and when required,” he said.

Tasmania has declared the City of Whittlesea a COVID-19 high-risk area, meaning anyone who has been there since May 6 “should not travel to Tasmania at this stage”.

Affected travellers who get permission to enter from the deputy state controller via the G2G PASS system will need to go into hotel quarantine.

Anyone already in Tasmania having visited the council area should self-isolate until they test negative and travellers from Melbourne should monitor for symptoms, the Department of Health says.

Travellers who have visited any of Victoria’s listed exposure sites will not be allowed to travel to Tasmania unless they are classed as an essential traveller.

Those who have visited an exposure site since May 20 are required to self-isolate immediately and call the Public Health Hotline on 1800 671 738 for further advice.

The Northern Territory government had not declared Whittlesea as a hotspot on Tuesday night but did restrict travel from the exposure sites.

Anyone who visited a Tier One site must get tested and quarantine for 14 days regardless of the result, while travellers at a tier-two site can stop quarantining once they test negative.

Those already in the NT must quarantine until they test negative while all new arrivals from greater Melbourne should monitor for symptoms and get tested immediately if they arise, the government says.