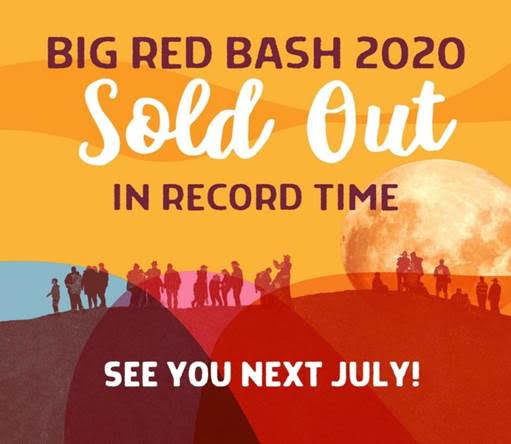 Tickets to the 2020 Birdsville Big Red Bash, the world’s most remote music festival, have officially sold-out today, Thursday, October 24, in record-breaking time – just one month after going on sale.

The all-ages outback festival is set to run July 7-9, 2020, on the striking red sands of Queensland’s Simpson Desert, in front of ‘Big Red’ – a 40-metre high sand dune that provides a spectacular natural amphitheater setting found nowhere else in the world.

The unprecedented bumper ticket sales came in a year when ticket allocation to the 2020 Big Red Bash has been pushed to a record 10,000 festivalgoers – up from 9,000 in previous years.

The 10,000 ticketholders for the 2020 festival are set to attend Australia’s biggest outback event from every State and Territory, as well as abroad.

“2020 will see the biggest line-up in Big Red bash history, and we hoped that tickets would sell fast,” said Big Red Bash Founder and Organiser, Greg Donovan. “With a beautiful, unique destination on offer, we have been a sell-out event for the last few years – and had thought we would sell-out before Christmas. But to do so after only a month – and with an extra 1,000 tickets to sell this year, it’s extraordinary.

“In the current market, and with some other well-established music festivals that are staged before us still on-sale, we couldn’t be more thrilled. We’re also excited to be bringing so many travellers through Outback Queensland. The Queensland Government has estimated that the Big Red Bash generates more than $12 million in revenue for the region. And a lot of this is on the journey out to the festival. With times so tough in most of these regional areas, the tourist dollar is really helping small towns that are doing it tough,” added Greg Donovan.

The Big Red Bash is supported by the Queensland Government via Tourism and Events Queensland and is a proudly family-friendly event, offering dog-friendly camping and concert areas, with children aged 11-and-under able to attend for free.