The Caravan Industry Victoria Hall of Fame Business Awards at Crown Palladium is always an outstanding night but this year was made extra special when Warren Parrot accepted the 2019 Media Award, in Recognition for Outstanding Commitment and Promotion to the Caravan Industry. Warren is no new-comer to the media or Caravan industries. His father Colin had his own advertising agency which left a lasting impression on Warren from a young age. Many of Colin’s clients were from the Caravan Industry and as a kid Warren found himself following his father around during school holidays to see Gerry Ryan at Jayco, playing hide’n’seek in Doug Thorley’s Caravan Dealership or wandering around Caravan Shows as Col did the rounds.

After 19 various jobs between the ages of 17-23, Warren started his career in Media in 1996 at the Herald Sun Newspaper, working initially in Features / Supplements on liftouts such as the ‘Home Show’ and ‘Pool & Spa Show’ until securing a position as a Sales Rep on the ‘Cars Guide’. Whilst Warren’s job was predominately to sell to Car Dealers and manufacturers, due to his father’s connections in the Caravan Industry, Warren created the idea of producing a National supplement on the Caravanning Lifestyle which he was highly successful securing enough advertising to produce a 16 page liftout which appeared in all News Limited major daily newspapers around Australia winning him the Award for Sales Rep of the Year in 1998.

Warren moved to Pacific Magazines where he worked for a time on TV Week & TV Hits magazines. His hard work there got noticed and he was poached to work for then ACP Magazines on Ralph magazine as well as across their many motoring titles including Wheels, Motor, Street Machine and more.

In 2004, Warren was hired to work for ACP’s sister company ACP Trader. The attraction was whilst they produced over 15 print magazines including Caravan World, they had a large portfolio of websites such as CarPoint.com.au and BoatPoint.com.au, and importantly two TV Shows they produced with Glenn Ridge called the Car Show, and the Boat Show which both appeared on Channel 9, an area that Warren had wanted to play in since he had left school.

Warren’s father Col created the Caravanning Lifestyle TV Show Discover Downunder, a show he had been trying to get on TV since the late 1980’s and for nearly 5 years Warren worked with Col to grow the TV Show producing 94 episodes in 4 ½ years. During that time Warren used Col’s TV Show to help launch Trader’s then RVPoint.com.au (now Caravan Camping Sales), he created another TV Show called Car Nuts which ran on NBN in Newcastle and as a DVD on Unique Cars magazine, with Shannon’s Car Insurance they created ‘Precious Metal’ magazine, and with the help of James and Grant Manson from Cameron Damon Media they created and launched Motorhome World Magazine, and Camper Trailer Australia which still survives today. 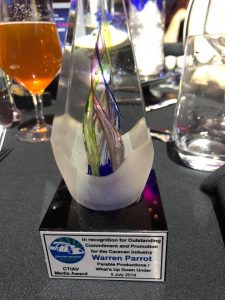 When the GFC hit Australia in 2009, ACP Traders opinion was that Discover Downunder’s future was un-certain so they made Warren redundant.

After a month off, Warren met with Col and Paul Blatchford and together they created Parable Productions Pty Ltd.

Whilst the intention was to continue with Col’s TV Show Discover Downunder, a television show about caravanning and camping around Australia, circumstances made that impossible and as a result, What’s Up Downunder was born.

While What’s Up Downunder has become the flagship of Parable Productions the company now also produces the Off-Road Adventure Show, Camper Trailer Lifestyle as well as several very successful magazines and digital platforms. Collectively each year the business now produce over 50 episodes of TV, run over 20 websites, produce over 40 e-magazines and over 25 digital buyers guides, they send out over 300 e-newsletters and over 400 client e-blasts and attends 8 of the Caravan Association run Caravan Shows where they produce between 200-250 interviews with industry businesses to support the industry at large for distribution through all of their growing set of media.

It’s Warren’s dedication and outstanding commitment to the caravan and camping industry that has seen him recognised at the gala.

“Our entire mantra since we began over 10 years ago was to create a diverse set of effective and affordable media for Caravan Industry partners and friends that would help accommodate all budget types, sizes and needs. Everything we do at Parable Productions is with the utmost consideration of how it will help and improve the industry we love, no other industry in Australia has the benefit of a company like ours that works directly ‘with’ the industry to secure its on-going success” said Warren.

With What’s Up Dowunder in its 10th season of production Warren recognises that it’s the team behind him that has helped bring the show, and the other company assets to where they are today.

“You don’t do, or get these things by yourself.  Our hard working team at Parable Productions and the amazing miracle workers who have been with us over the years are the reason we are still here 15 years later.

“And importantly, it would be remise of me not to recognise the partnerships and friendships we have built within the industry itself who, without them, we simply could not continue supporting the industry in its entirety.” The good looking statue will take pride of place in the Parable Productions office. It will be a constant reminder of how Parable Productions, along with the caravan and camping industry as a whole have grown, and part of that growth has been thanks to the contribution made by Warren Parrot.