One lucky visitor could WIN a Bailey Rangefinder Nebula Caravan

The Australian-built and outback-proven Rangefinder Nebula is the major prize in the Passport Competition open to all visitors to Queensland’s largest caravan exhibition at the Brisbane Showgrounds. There are seven locations around the show where patrons need to get their Passport punched. Once they’ve visited all the locations, they need to write their contact details on their Passport to go in the running to win the new Nebula.

In addition to the full range of both imported and locally-built Bailey caravans on Stand 401 located under the Marquee, Bailey Australia will also have a Rangefinder Nebula in another key location at the show, where it will be identified as the Passport prize with flags and signage.

The lucky winner of the Nebula, with its Euro-style front entertainer lounge, panoramic Skyview windows, central galley, separate shower and bathroom and rear island queen sized bed, will be announced shortly after the show on Wednesday June 15. 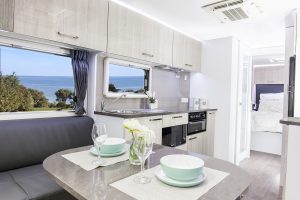 Show organiser Jason Plant from Caravanning Queensland said the Bailey Rangefinder Nebula is the most valuable individual prize to have ever been offered to visitors to the Queensland Show since it was first staged in 1969.

“It will be a real drawcard for Show visitors this year,” he predicted. “People traditionally go to the Show to make decisions on the best caravan or camper trailer for their travels, but this fantastic prize will provide another reason to attend”.

The Rangefinders strength and suitability was proven graphically last August when a standard Australian-built Rangefinder Nebula and a Rangefinder Gemini family van together crossed the continent from west to east, travelling 8,300km through the Red 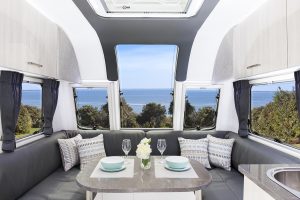 Centre. The caravans travelled more than 2,300km of the trip off the bitumen, on rutted and rough roads.

Both caravans survived the mammoth trip without any structural issues, proving the strength of Bailey’s unique and patented Alu-Tech bodyshell construction system that is strong enough to support a family station wagon on its roof.

All Rangefinders are built from the inside out in Melbourne, with local CNC-cut furniture securely fixed in place before being bonded and fastened to the caravan walls and ceiling panels to create an immensely strong overall body structure.

Their Australian designed and sourced Dura-gal steel chassis, furniture and appliances are all chosen for their suitability for demanding Australian conditions and their local service and support.

The marriage of these leading-edge designs has produced the sought-after combination of a fully-featured, full-size caravan with an

unladen (tare) weight of just 1800-1950kg (depending on model) and a huge payload of 500kg. This allows all Rangefinder models to be towed legally and safely by large Australian family cars and mid-size Australian 4WDs like Toyota’s top-selling Prado.