A Redbank Plains couple are planning their family’s next big trip after scooping the top prize, worth more than $100,000, at the 50th Queensland Caravan, Camping and Touring Supershow. 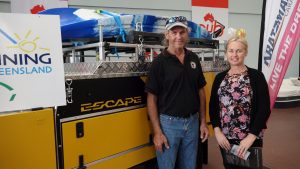 Scott and Carla in front of their new Cub Camper Trailer

Scott and Carla were the winners of the biggest prize ever given away by Caravanning Queensland at its annual industry showcase. The couple are now the proud owners of a one-of-a-kind, 50th anniversary Cub Camper Trailer and a Volkswagen V6 Turbo Diesel Amarok.

The windfall was even more unexpected, as the couple went to the Supershow only looking to purchase a basic 12V camper shower. Now, they are planning on where and how to use the prize which will revolutionise their camping experiences.

Scott said “Usually, I can’t even win an argument, never mind an amazing prize like this adventure pack! We enjoyed the Supershow but until we got the call to say we’d won, we thought all we’d left with that day was a shower and some information leaflets.

“We already do a bit of camping, mostly in the bush out west around Stanthorpe and Rathdowney but now thanks to this prize win we’re going to be able to explore a bit further afield. It’s great timing because our son recently bought a 4WD so we’ll be able to take the Amarok and go camping together, or even let him borrow the Cub Camper.”

The couple entered the competition at June’s Supershow, which was also the largest prize to be offered at any Caravanning Industry event in the country. 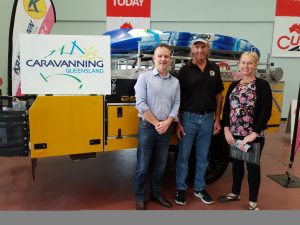 Caravanning Queensland General Manager, Jason Plant, said he was thrilled to make the prize-winning phone call and present Scott and Carla with their life-changing prize.

“It’s fantastic to hear of Scott and Carla’s plans to really make the most of their prize, the biggest we’ve ever given away in the 50 year history of Caravanning Queensland and in the industry nationally,” he said.

“Being able to get out and explore the landscape and communities throughout the bush and east coast is one of the great advantages of living in Queensland. There’s no better way to do that than by caravan or camper trailer and Scott and Carla can now explore destinations that were previously out of reach.”

For more information on Caravanning Queensland and its upcoming Pre-Christmas Caravan and Camping Show visit www.caravanqld.com.au