Victoria’s caravan industry contributed more than $2 billion to the state’s economy in 2017 – and employed 6,600 Victorians in caravan manufacturing, retail, repair and servicing. Figures released by the Caravan Industry Association of Victoria (CIA VIC), the peak body for Victoria’s caravan industry, show the industry has created 1,450 new jobs in the six years from 2011. 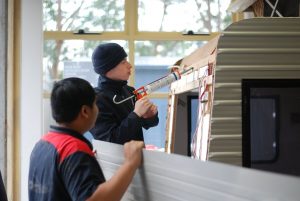 CIA VIC Chief Executive Officer, Rob Lucas, said there had been a 28 per cent increase in jobs over six years, bringing the 2017 total to 6,587 jobs.

“Manufacturing accounts for 4,123 of these jobs, in sharp contrast with the decline in other sectors such as the car industry,” he said.

“Overall, we have achieved average annual jobs growth of more than 4.6 per cent for six years, well ahead of overall state and national employment figures.

“This amazing growth is due partly to increasing production, and partly to the increasingly luxurious, premium priced vans favoured by Australians.”

Mr Lucas said the industry comprised more 1,000 individual enterprises with an annual payroll of $330 million and a total value-add of $680 million. He said caravans were helping to sustain Victoria’s tradition as the manufacturing heartland of Australia, with 90% of all Australian-made recreational vehicles built in Victoria.

“Our industry’s growth is being driven by the Victorian Caravan and Camping Industry Blueprint which we created in 2012,” he said.

“The blueprint laid out ambitious targets for training and industry standards, and has enjoyed the support of successive State Governments, notably the Departments of Economic Development, Education & Training, and Tourism.”

Despite the impressive growth, Mr Lucas said there was still much to be done by the Association to raise the industry’s overall business standards.

“The key to success is to deliver quality and value to our customers, and we have many initiatives under way to help achieve this, especially in training,” he said.

“Our National Caravan Industry Training College has been gaining traction steadily since it started in 2015, and we have exciting plans to build first class new training facilities.

“We are proud to be one of Australia’s top job creators, especially for manufacturing jobs, and our training and development plans will bring even more growth.”

For some more information on the Caravan Industry Association of Victoria, head to ciavic.com.au