Since New Age Caravans first appeared on the Australian caravanning scene in 2008 they have led the market in so many ways. The biggest impact they had in those early days was lifting the décor of caravans from cottage style to modern city apartment. Away from the wood and patterned curtains and into the sleek white look with clean lines and a feeling of space.

This modern approach saw New Age Caravans become a market leader in sales and ensured that their approach to innovation would continue to drive their business.

The Walkinshaw name came to prominence in Australia when Tom Walkinshaw first started racing his Factory Jaguar XJS at the Bathurst 1000 in 1984, followed by a three-vehicle assault on Mount Panorama in 1985. Two years later Tom Walkinshaw partnered with General Motors Holden to produce high performance vehicles (HSV), unveiling the first ‘Walkinshaw’ Commodore in 1988.

Since 1987 HSV built an array of high performance and luxury vehicles and have become an Australian cultural icon deeply rooted in the identity of many auto enthusiasts. Since its acquisition by Walkinshaw Automotive Group, New Age Caravans has quickly integrated their unprecedented automotive expertise in engineering, design and manufacturing to introduce a new level of innovation to the RV industry.

“To gain a unique foothold in the market, our focus has been on using WAGs resources to design and tool our own components and build new products that can’t be replicated by other manufacturers,” said Chief Operating Officer of New Age Caravans Oliver Lukeis.

“At the moment the RV industry is much like the building industry where houses are designed and built using the same components and materials, and we want to change this by taking advantage of our new capabilities to introduce an unmatchable level of design, engineering, quality and safety to our products.”

With the Walkinshaw influence now firmly integrated into New Age Caravans, they are re-emerging as an innovative market leader. New Age Caravans now has access to intel and technology that no other caravan manufacturer in Australia has.

The bold new Walkinshaw inspired direction of New Age Caravans is evident in the updated and new range of products. The Wayfinder camper and XU toy hauler are the first brand new products developed with a strong Walkinshaw influence, including a myriad of new parts, manufacturing processes and design aesthetics that are unique to New Age Caravans.

“In mid-2018, we launched the Wayfinder, which is New Age Caravans’ first wind up camper, and it has 400 unique components. Each component was designed and engineered for purpose and exclusively for the Wayfinder product.

“Then in February, we launched the Toy Hauler which is a full-height caravan with a 22ft interior, a rear ramp door, and a fold-up bunk system in the rear so you can store items such as dirt bikes when you’re travelling. This product comes standard with items such as Toy Lock which is a cable that locks valuable items to your caravan overnight when the beds are in use,” said Lukeis.

They have also begun exciting re-vamps to existing product lines to integrate the WAG theme, this being evident in the all new Manta Ray, Big Red, Oz Classic, Road Owl and Desert Rose ranges.

New Chairman, CEO and Board 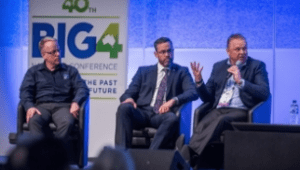 “I am delighted to be appointed CEO of New Age Caravans and working with the new board on our journey ahead, “said Krizman.

“I’m excited by the possibilities that lie ahead, and I’m looking forward to leading the future direction of the company which currently holds a very strong position in the market.” 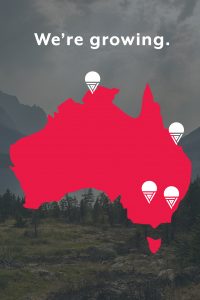 New Age Caravans have expanded their dealership in Australia and New Zealand to 16, with four new dealerships opening in the space of just eight weeks between July and September 2019.

“We only sell our caravans through our own dealer networks, so the past 12 months has been spent carefully identifying areas where dealerships would be best placed. For example, before we opened our new dealership in Darwin, the next closest was either Townsville or Port Headland; we had no representation in the top end, said Dealer and Business Development Manager for New Age Caravans Shane Holloway.

“Our new locations give us the opportunity to reach more new and existing customers around Australia. Customers can now buy and service their caravans locally in Griffith and Nowra in New South Wales, Darwin in the Northern Territory, and Bundaberg in Queensland. In some cases, we’ve seen existing dealers relinquish other licenses to join our network and only sell New Age Caravans.

“New Age Caravans was already a strong and well-established brand in the RV market, but since the Walkinshaw Automotive Group acquired the company, interest from businesses wanting to sell our caravans has increased.”

While there has been a focus on opening new dealerships, Holloway said they have also been working to ensure the existing dealerships are providing a consistent customer experience, no matter where they are located.

“We’ve been working closely with our current Australian and New Zealand dealerships to equip them with the tools and training necessary for them to be one-stop-shop experience centres where customers can get everything they need for their caravans,” said Holloway.

For more information on all our dealerships in Australia and New Zealand or to find your nearest showroom, visit: https://newagecaravans.com.au/find-a-dealer/

New Age Caravans has recently entered an exclusive OEM arrangement with REDARC Electronics, which is the first arrangement of its kind in the caravan industry.

According to Shane Holloway “REDARC is an Australian manufacturer and supplier of electronic components to the RV industry, and our relationship gives us direct opportunity to their products and will allow us to bring aftermarket fitments such as electric brakes, in-house.

“For our customers, that means they’ll be able to have aftermarket fittings done onsite at our dealerships, and they won’t have to find another supplier.

“This will provide our customers with a better buying experience, and when they leave with their new caravan, everything will be ready to go. Many of our dealerships already offer aftermarket fittings, and we are working to make this service available at all 16 locations,” said Holloway.

In 2009 New Age manufactured 5 caravans a week, 10 years later they are making over 2000 a year. In these years of rapid growth they have kept true to our founding principles of innovation and pride in our product. Along the way they have won many awards for product design, manufacturing, community work and business operation.

New Age Caravans, designed for the road ahead. 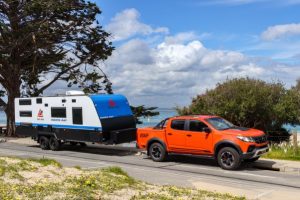